All contents of this website
© Julien Grossmann
Ingenious, playful and with an uncanny reverberation: Julien Grossmann is in the process of developing his own language, so devoted to sound that many people share great hopes of the artist, who was born in 1983. Grossmann, awarded the Prix d’art Robert Schuman in 2009, arranges sound collages, produces interwoven spaces, and develops closed systems that seem to lead a life of their own. Almost all of his works to date generate irrational moments as well – they seem constructed, and yet at the same time they appear to have grown quite naturally. This is probably why Grossmann’s art causes the viewer to think about the evolution of the works and the artist’s sources of inspiration as much as he does about the physical laws on which they are founded.

In the case of his installations, it is possible to observe again and again how the process and the repetitive loop are presented as resistance against the force of logos. In its title, If I Had Known (2010) already draws attention to a struggle for visibility and recognition in face of the invisible and the unrecognised. Grossmann explores the field of tension between knowledge and ignorance in this work, giving it form in the shape of a labyrinth. He himself describes the work in the following way: ‘Coming out from a horizontally tipped 16mm projector, a long loop of film is deployed into space to draw a vast figure of a labyrinth constantly turning on an octagonal board.’(1) The emerging system of paths refers to the lines of the labyrinth floor in the cathedral Notre Dame d’Amiens, which visitors can still walk on today. In this work, however, the question raised is not whether one should turn right or left at the next crossing of ways. Here, the artist stages the progress of a humming, unexposed strip of audio film, which is redirected repeatedly along a large number of small rolls and thus shaped into an overall labyrinthine figure. To some extent as the viewer’s representative, this loop explores the available possibilities. The eleven-minute progress of the 80-metre long strip through the labyrinth creates a large spectrum of sound variation, produced by the system itself. Primarily, it comprises a repeated scraping of the material and the noise of the projector’s motor.

As in this work, the artist has also placed emphasis on transgressions and–quite often–on emergence and passing in other works, which bear a trait of the fleeting or processual. Since the 1960s at the latest, there has been widespread conviction that the artwork ‘from the moment of its production (...) must be isolated from the real world. All the same, it is in the studio and only in the studio that it is closest to its own reality, a reality from which it will continue to distance itself. It may become what even its creator had not anticipated, serving instead, as is usually the case, the greater profit of financial interests and the dominant ideology.’(2) The two-way production and presentation conditions of his audiovisual works mean that Grossmann largely avoids the work developing distance to its own reality. This distance emerges, for example, when works are presented in exhibition spaces–and it was judged to be a problem, quite correctly, by Daniel Buren.

Simultaneity of production and performance also occurs in the work Kokin (...) Slendro (2010). Here, Grossmann investigates the subliminal mechanisms of image and sound carriers by questioning their physical presence, their cultural codes, and their narrative capacity. On each of six narrow, high tables a record player is presented under an acrylic glass cover. At the centre of the vinyl record on each player there is a small model of an island, which Grossmann made using the process of rapid prototyping, which is also called similar to 3-D printing. The apparently stereotyped islands are characterised geographically only by minimal individual features. They show the large degree to which our idea of reality is constructed, so that only a few characteristics are sufficient for us to classify something ‘as something’. The slow circling of the islands in this diorama is accompanied by six instrumental songs pressed onto the vinyl records. The songs are very catchy tunes, which sum up Grossmann’s approach to the world on a musical level. Everything can be interwoven: body and imagination, reality and fiction.

In response to the question of how he arranges his music and its relation to fine art, he responds: ‘Music is rarely written down (…) All the tracks are played on a keyboard, commanding a synthesizer mimicking certain acoustic principles: principally, it works on a harmonic system, which is quite unusual for a machine. (…) Making music is for me rather intuitive, but the more it goes, the more I like to deal with certain concepts, rules and limitations, which in fact mostly come from a visual art way of thinking.’(3) The influence of regulations in art on the production of music was already indicated five years previously in La chute des monarchies (2005). Here, Grossmann arranged an ethereal-repetitive soundtrack as part of an installation. The stylised image of a crown appears repeatedly in a video projection, only to fall to the ground–virtually–and shatter in slow motion into a thousand fragments on a real heap made of two kinds of marble chippings. A loudspeaker placed above echoes the high soundtrack, while a second loudspeaker is hidden in the heap of chippings to emphasise the impact of the crown with a musically extended crash. The artist found the crown motifs in illustrations seen during a stay in Finland. He then processed them digitally and electronically. In the soundtrack the ethereal sounds are closely interspaced with darker tones. In these relatively early works, Grossmann already showed an interest in the interlocking of immaterial and physical levels and the reciprocal weave of representation and presence. To the present day, his work has been based on such impressions, developing further and sounding out the relations between imagination and corporeality in a range of ways. 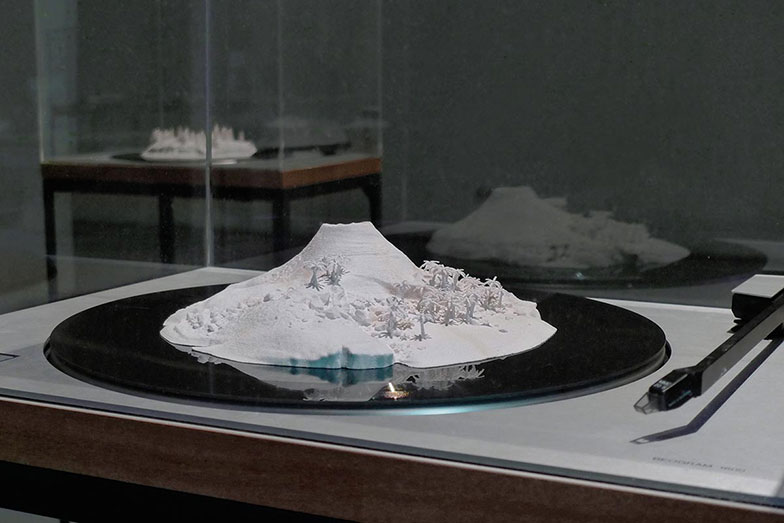 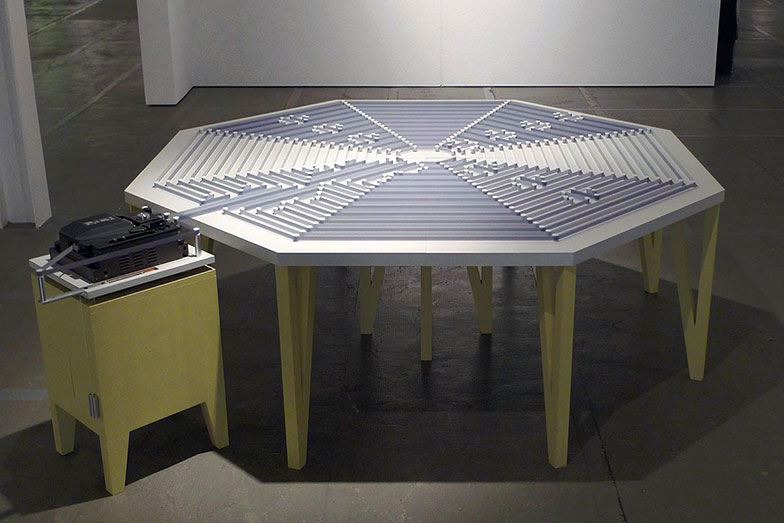 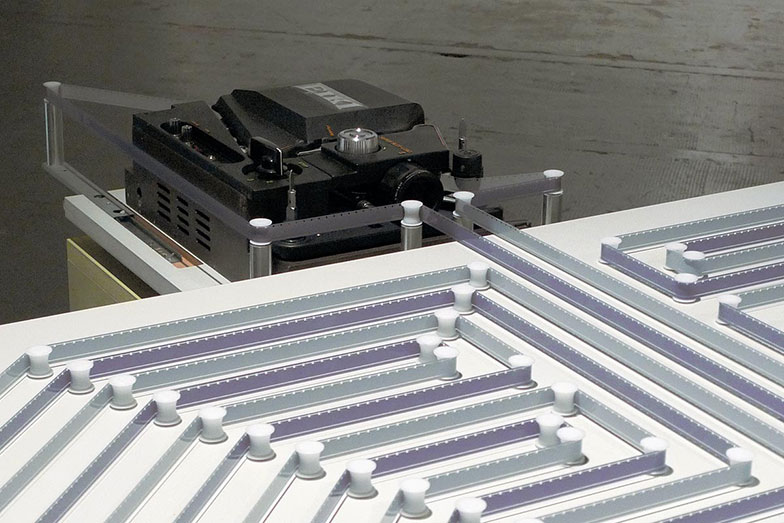